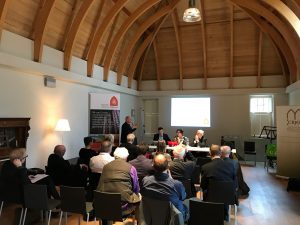 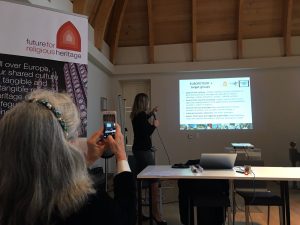 The Multiplier Event was organised by our partner Future for Religious Heritage (FRH Europe) together with the Centrum voor Religieuze Kunst and Cultuur (CRKC) and the Foundation Alamire, International Centre for the Study of Music in the Low Countries. Altogether, there have been 17 participants to the event.

Pilar Bahamonde (SP), directora del Centro de Estudios Lebaniegos, Administrator of Future for Religious Heritage, first presented an introduction to the issues addressed by Europetour and highlighted the added value of the project for FRH members. She talked about the partners of the project, its main priorities, its objectives and target groups as well as its different phases.

Lilian Grootswagers (NL), owner of Erfgoed.nu, Secretary of the Council of Future for Religious Heritage, touched upon the “modular concept“ of Europetour. She gave an insight into the methodology of the project, based on a bottom-up approach and mentioned the survey which was previously carried out in order to identify the training needs of those people active in rural cultural tourism across Europe. She then gave an overview of the 8 training modules currently under development as well as the Social Media Guidelines for cultural tourism in rural areas.

Jan Jaspers (BE), Directeur of the departement Onroerend Religieus Erfgoed at the CRKC, talked about rural and religious tourism in Flanders. He first provided the audience with the general framework in Flanders: history and situation of parish churches in Flanders, Church Policy Plan, new and alternative uses of the places of worship across Flanders. Afterwards, he went more in depth with the case-study of Langdorp-Wolfsdonk and explained how the church of this village is enhanced and promoted through different means.

Those presentations were followed by a discussion and sharing knowledge session. The attendants agreed on the relevance of the training modules and shared ideas on how to implement them, once finished, in their own organisations.

Lastly, the attendees were invited to discover the recently open museum Parcum, dedicated to religion, art and culture.