2018 highlights the final round of meetings for the EUROPETOUR partnership, starting with an experience of the German-Polish “Klosterland” network and our reception near the town of Mysliborz, hosted by Izabela Matusiak, of the community of Mysliborz, and Stefan Beier, head of the board of the transnational monastery network: www.klosterland.de

Are you, too, curious about networking across borders in cultural tourism in rural areas? Then read on, and learn more about what we found during our meeting in Poland and Germany.

Myślibórz is situated in the north-west part of Poland, near the border with Germany (40km). It is the capital of the Myśliborskie Lake District, with over a hundred lakes. The biggest one, Myśliborskie Lake (618 hectares), is partly within the town. The town was situated on the crossroads of many important trade routes. In spite of historical disasters, such as fires, invasions and wartime, some historical buildings have survived: the Collegiate Church and the Dominican Monastery from 13th century, two medieval gates and the Powder Tower from the 14th and the Town Hall from the 16th century.

The town of Mysliborz, we learn from our project visit, owes much of its fame to the prophetic visionsof Sister Faustina Kowalska. Despite her never having been to Myślibórz, her confessor faher Sopoćko came to the town and recognized in the Saint Cross Church “the little church” of Sister Faustina’s prophetic visions. Today, the church is known as the SHRINE OF DIVINE MERCY in Myślibórz, and the mother house of the Congregation of the Sisters of Merciful Jesus hosts thousands of pilgrims every year. They leave that place enchanted by the unusual atmosphere enriched by the surrounding nature of the nearby park, river and lake.

You can also see the film about the life and visions of Saint Faustina here:

or the Polish film

Mysliborz, too, is known under its former German name of Soldin, which we learn form an interesting and engaging talk with the mayor Piotr Sobolweski. For Mysliborz, it has been particularly important to remain bilingual (German-Polish) in its presentation to the public, and especially regarding tourism.

Cultural tourism, as we learn, is only in its early developing stages, and one such interesting step forward has been the networking effort with Klosterland. 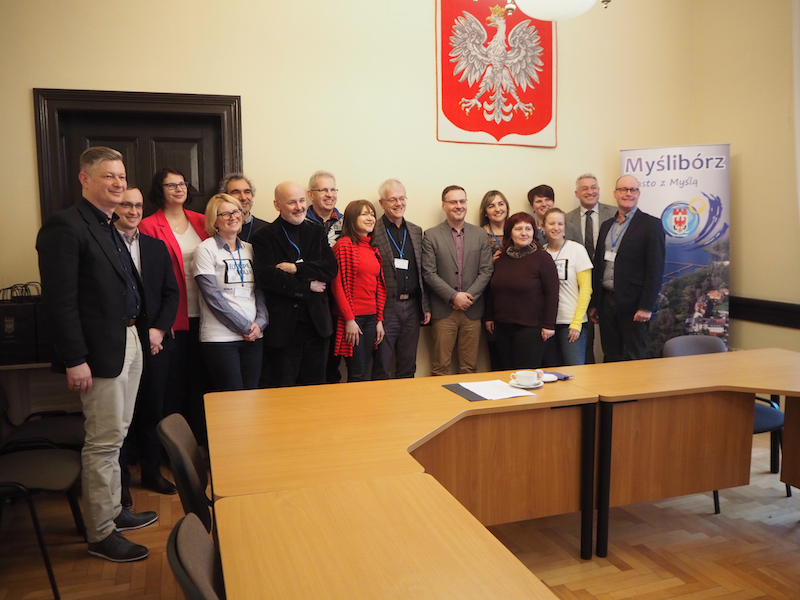 The EUROPETOUR team being welcomed in the community hall of Mysliborz, Poland. 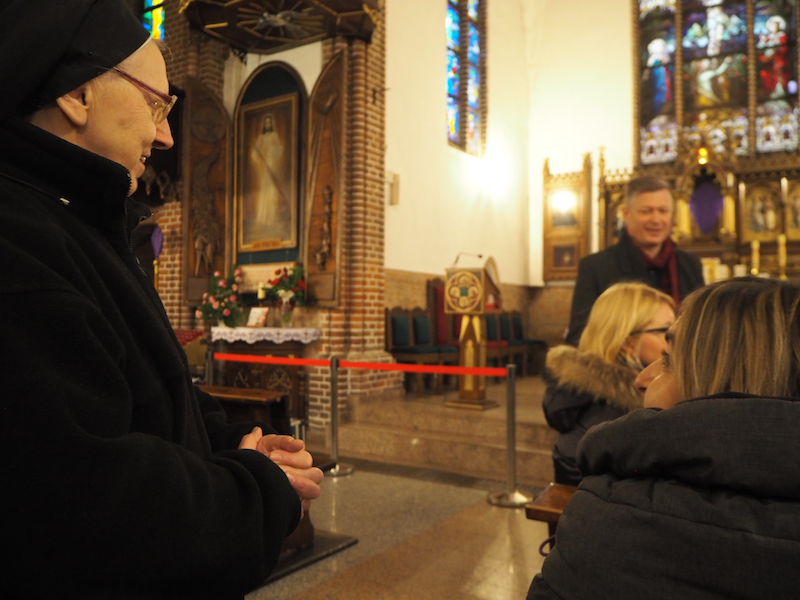 Learning more about the miracle of Sister Faustina Kowalska: Lovely visiting the nearby church as well! 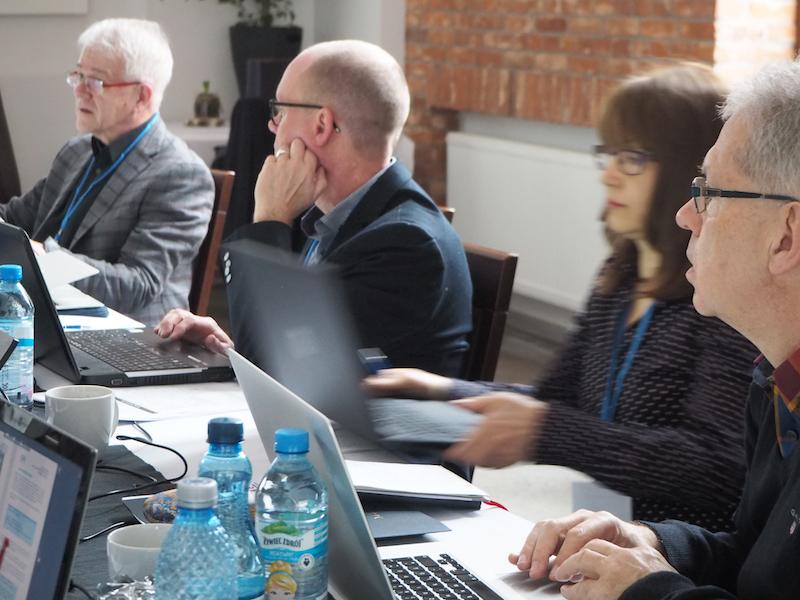 Mysliborz, too, has hosted us to our formal work meeting in W Sam Las … 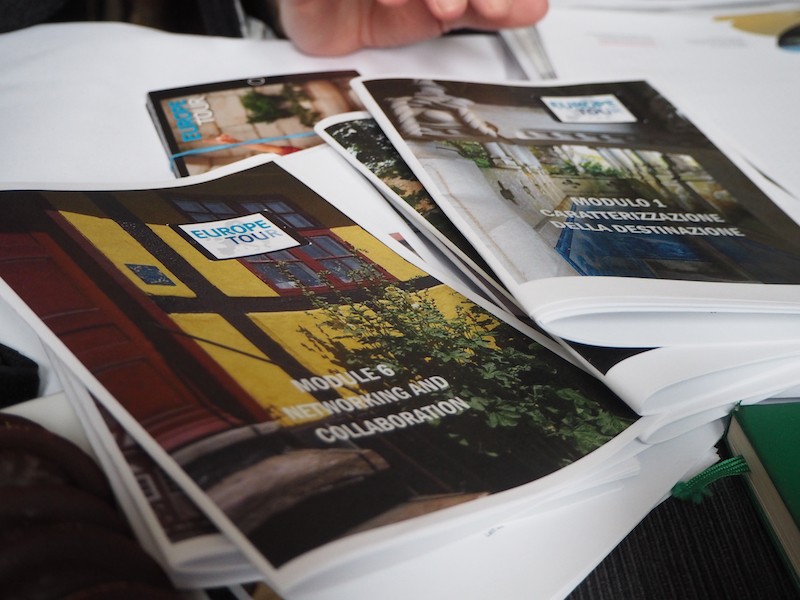 … where we have been working hard finalising the latest version of the Training Modules for Cultural Tourism in rural areas. 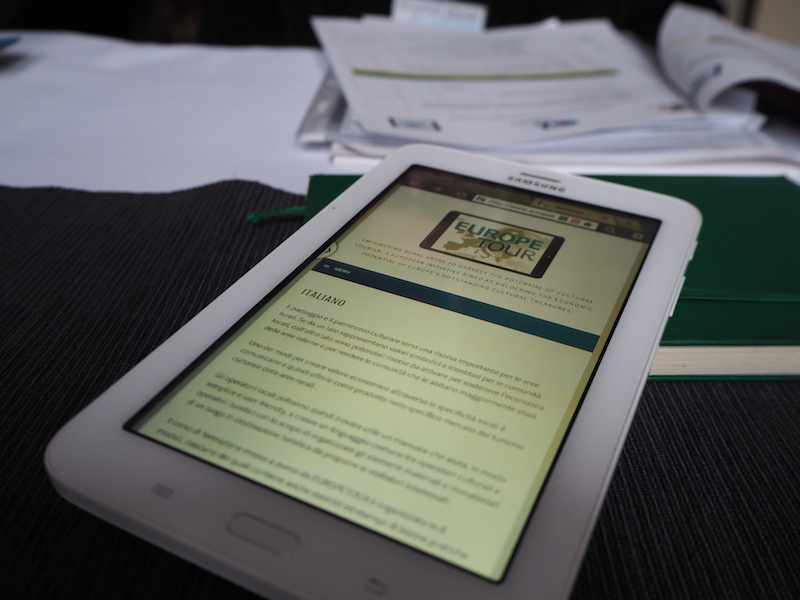 The idea is that they may be used around Europe as resources for stakeholders working in the field, hence their translations in seven European languages … 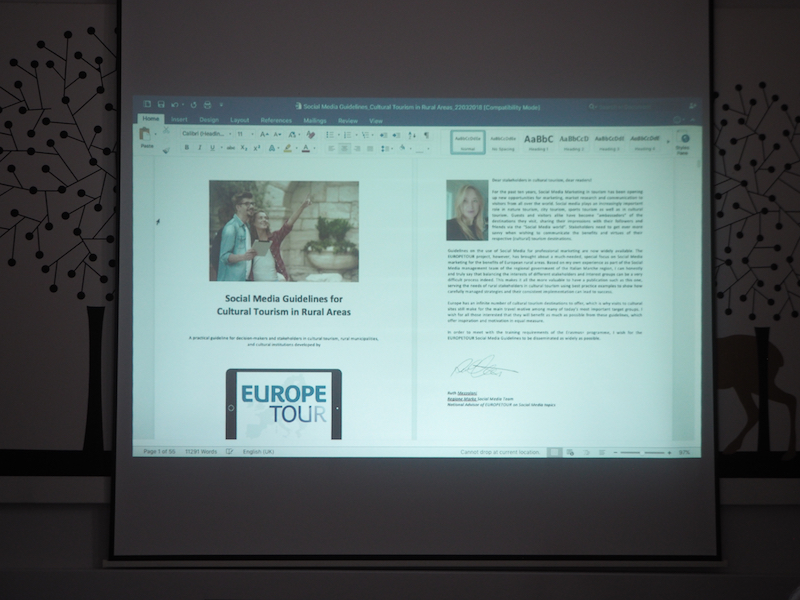 … including finalising the draft for the Social Media Guidelines, freely available by summer 2018.

Cross-Border Experience: the europetour PARTNERS visit the notable towns (and monasteries) of Angermünde and Chorin

So how does it work with European cross border cultural tourism activities? Stefan Beier of the German-Polish Klosterland network is the perfect host to explain both the challenges as well as the success stories. The EUROPETOUR approach is to learn what makes the difference for culturally interested visitors.

In Poland we find it very comfortable to find Polish-German bilingual signposting – but where is it on the German side? “We are working on that, specifically for historic buildings”, explains Christian Radloff, the vice mayor of Angermünde. He tells us about a working group of historic cities that fosters the vitalisation of their inner cities by cultural events, like a summer theatre. The former Franciscan monastery in Angermünde (for Angermünde is a Klosterland member)is now serving as a multifaceted event space for different cultural occasions and events. Andrea Frick, the responsible officer for culture and tourism, honestly talks about challenges in cooperation of cultural institutions, the local tourism organisation, restaurants and accommodation providers, as part of “an ongoing process”. A cross-border bicycle road, common marketing activities and a new museum for exhibitions is currently established with the support of the European INTERREG programme. 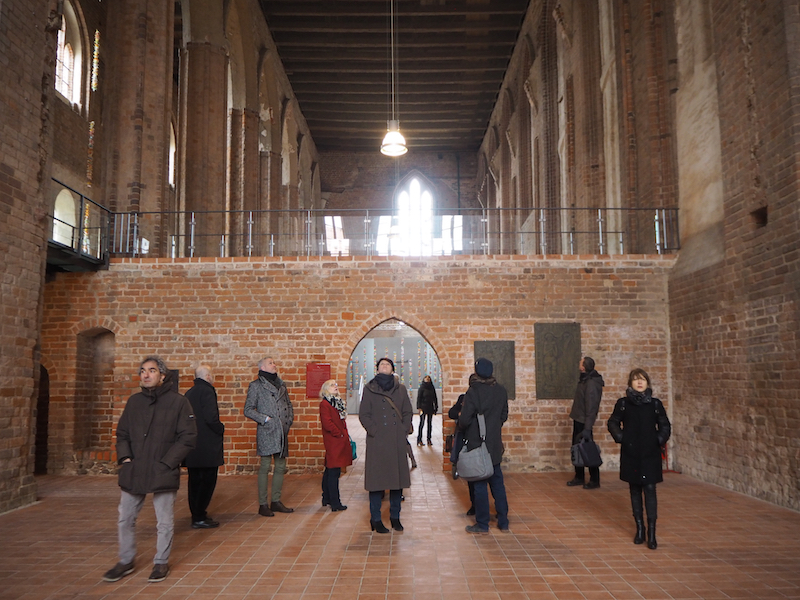 Standing inside the former Franciscan Abbey Church in Angermünde …

In Chorin monastery (also a Klosterland member) we learn how to (re)use the existing religious cultural heritage of a former abbey during medieval times. Director Franziska Siedler guides the EUROPETOUR partners through the vast and empty monastery space in the late afternoon of a winter day. She shows perfectly renovated space for exhibitions and concerts – an incredible experience! Yes, it was cold in #Chorin monastery, but this incredible monastic interior, the distinctiveness of the gothic architecture and the “power of place” were a most impressive mixture even on this frosty day of the EUROPETOUR visit. Truly,  the EuropeTour team recommends a tour to every visitor of the Klosterland border region!

In addition, and in order to have a more wholistic cultural tourism experience, we can also recommend you to visit the so-called “Alte Schäferei” near Angermünde, as well as the eco village Brodowin & shop, for either lunch or dinner. Both place offer local fare in traditional, rural area surroundings.

A strong cooperation of the community / municipal offices with the tourism authorities, the cultural institutions, as well as the church administration is the main success factor. 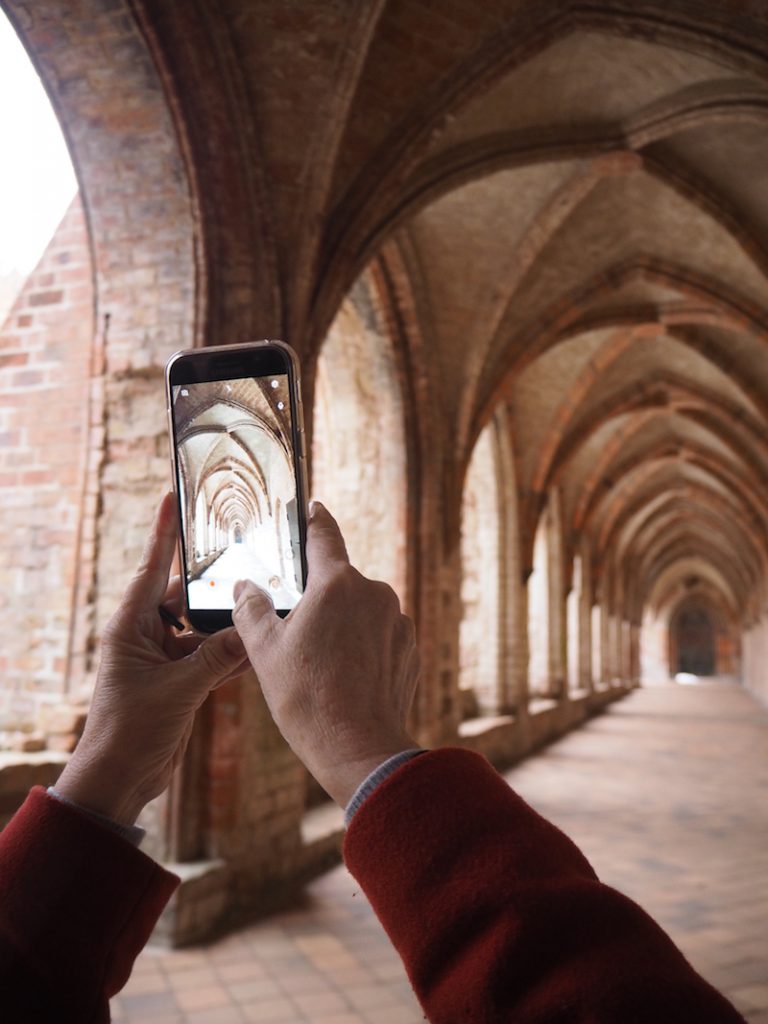 The cloister at Chorin monastery – Northern redbrick Gothic at its best! 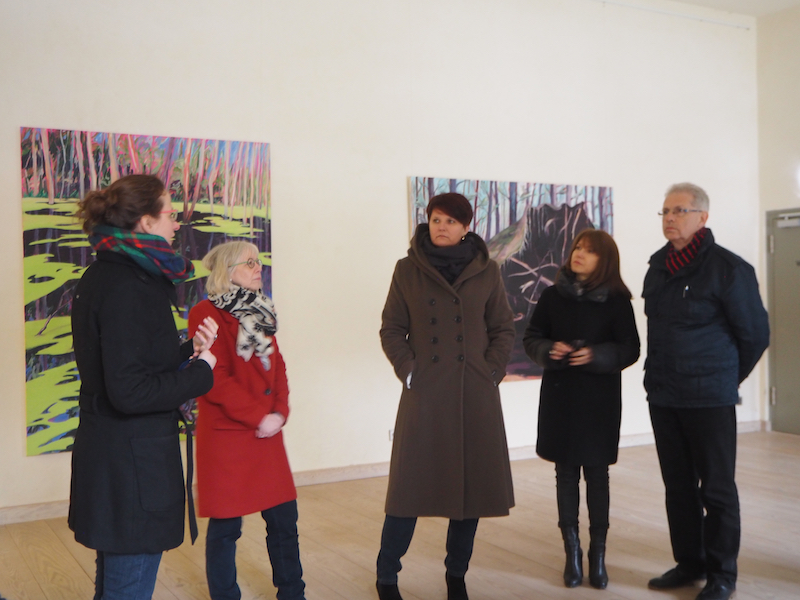 .. and learning about Chorin monastery being re-used as an art exhibition space.

This environment fit with a discussion with Martin Erdmann of Manufactum, a company with 600.000 clients in Germany only and an own catalogue of 300 monastic products. “Monasteries have to find the right clients”, he tells us in his presentation about Economic Conditions for Developing, Manufacturing and Selling of Monastic Products. Clients should know that their purchase has a direct influence on monastic life: “Monasteries need money for maintaining the buildings as they do not get support from church taxes”, he explains the efforts of monasteries in selling their traditional products. And “Prices in monastery shops are generally too low as they do not reflect the whole efforts for the products” – this is something our religious heritage partners will have to reflect on!

EUROPETOUR partners brought different items from monastery shops of their countries, which were then assessed by Martin. The majority would not fit the expectations he has in terms of  saleability. He explains in detail the requirements  to the fascinated EUROPETOUR partners: products have to be hand-crafted on-site (not in external companies!), authentic according to the rules of the order, produced in accordance with monastic recipes and methods and – beautiful. 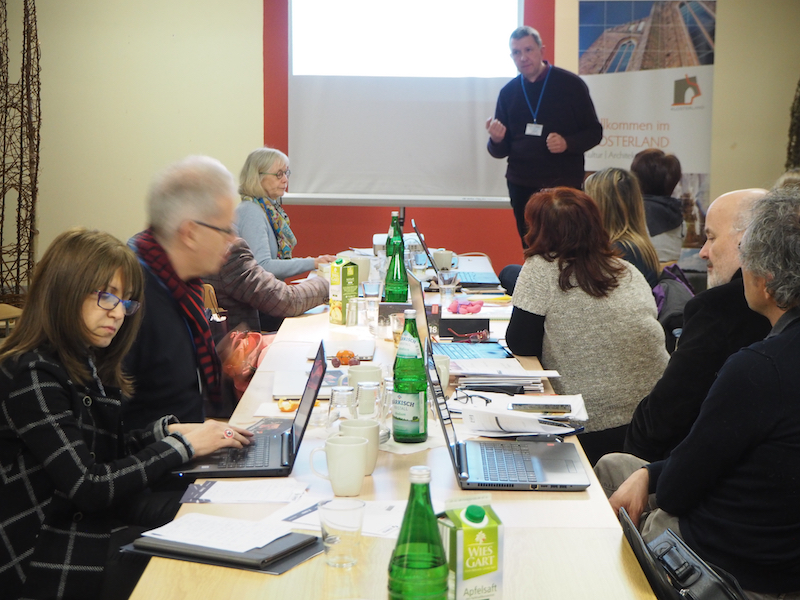 You can also learn more about  the “Klosterland” network by visiting the Klosterland pages in English,  German and Polish and the travel blog of Austrian EUROPETOUR partner Kreativreisen Österreich / Elena Paschinger at https://www.creativelena.com/en/travel-blog/my-first-time-visiting-poland-do-you-know-the-areas-around-szczecin-swinoujscie-mysliborz/. 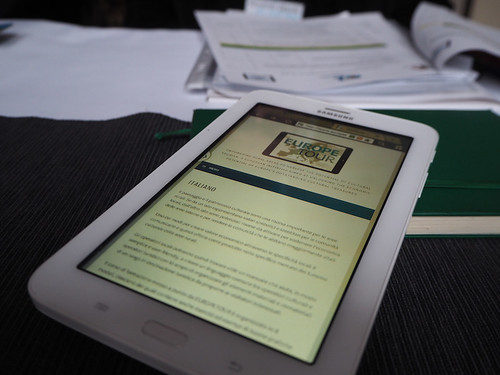